Within an estuarine system, tidal and river flows interact to produce complex and nonlinear hydrodynamic and sedimentary processes. In this way, the present estuarine shape and structure is defined. The response of an estuary to extreme conditions, such as heavy rainfall or large storms, is becoming ever more important for us to understand, as coastal regions become heavily managed and protected. Further, estuarine environments are vulnerable to climate change due to complex catchment-river-ocean interactions. Looking forward, sea levels around the Welsh coastline are set to rise by up to 1 m over the next century, and the frequency of storms and storm waves, high rainfall, and also drought events is projected to increase. Of particular concern, therefore, is increased flood risk of low-lying regions surrounding many of Wales’ estuaries. Additionally, the following processes are likely to happen in some Welsh estuaries in the future: increased fluxes of nutrients from agriculture, mobilisation of previously deposited flood plain sediments including their contained pollutants, run-off from agricultural land and mobilisation of pathogens, submergence of wetlands, disappearance of salt marshes, changes in suspended sediment and macro-nutrient concentrations, changes in estuarine morphodynamics, and consequent impacts on estuarine and coastal ecosystems.

Historically, land reclamation has occurred around the coast of Wales. For example, the natural surface area and tidal prism of the Dyfi Estuary (Fig. 1) was substantially reduced during the 19th century due to the construction of a rail network and associated embankments, acting as de-facto coastal defence structures. Coastal managers are now looking for the best course of action as the embankments are increasingly being overtopped by tidal and rainfall events. ‘Hold the line’, or coastal realignment strategies, will protect properties, agricultural land, and ecologically important areas, but at high economic costs and with unknown consequences further afield (for instance, upstream in the tidally-influenced river). A ‘do nothing’ approach will allow nature to take its own course, but also have unknown far-field effects.

All these issues are being investigated by CAMS, using high-performance computational models, in conjunction with detailed observational measurements. Local scale, high-resolution, morphodynamic models have been developed by CAMS for several of Wales’ estuarine environments. For application of the models, CAMS has worked closely with the Countryside Council for Wales and the Environment Agency Wales (now merged as National Resources Wales), and additional research initiatives, such as the Centre for Catchment and Coastal Research (CCCR), the Climate Change Consortium for Wales (C3W), SEACAMS, HPC-Wales/Fujitsu, and the NERC Macronutrients Programme (in collaboration with the Centre for Ecology and Hydrology (CEH)). Many of these initiatives are joint ventures with other Welsh Universities. Through research studies at CAMS, a greater understanding of complex coastal and estuarine sedimentary processes has been achieved in recent years, which has helped policy makers to establish efficient and sustainable management for the future (see ‘References’ below).

Around Wales, CAMS has developed estuarine models of the Dee, Conwy, Menai Strait, Mawddach, Dyfi, Milford Haven, Burry Inlet (e.g. Fig. 2), and Bristol Channel. Such models typically extend ‘up-river’ into the catchment and also offshore to resolve tidal propagation on the Irish shelf. Our estuarine models are either nested within shelf-scale models (using structured grids) or extended onto the shelf using unstructured grids (i.e. high grid resolution within the estuary and low resolution offshore). CAMS is also developing ‘Catchment-to-coast’ models which link atmospheric, catchment, sub-surface, and hydrological processes to the marine system, thereby enabling the entire hydrological and carbon cycles to be investigated. Our case studies for this approach are the Conwy Estuary and the Dyfi Estuary. 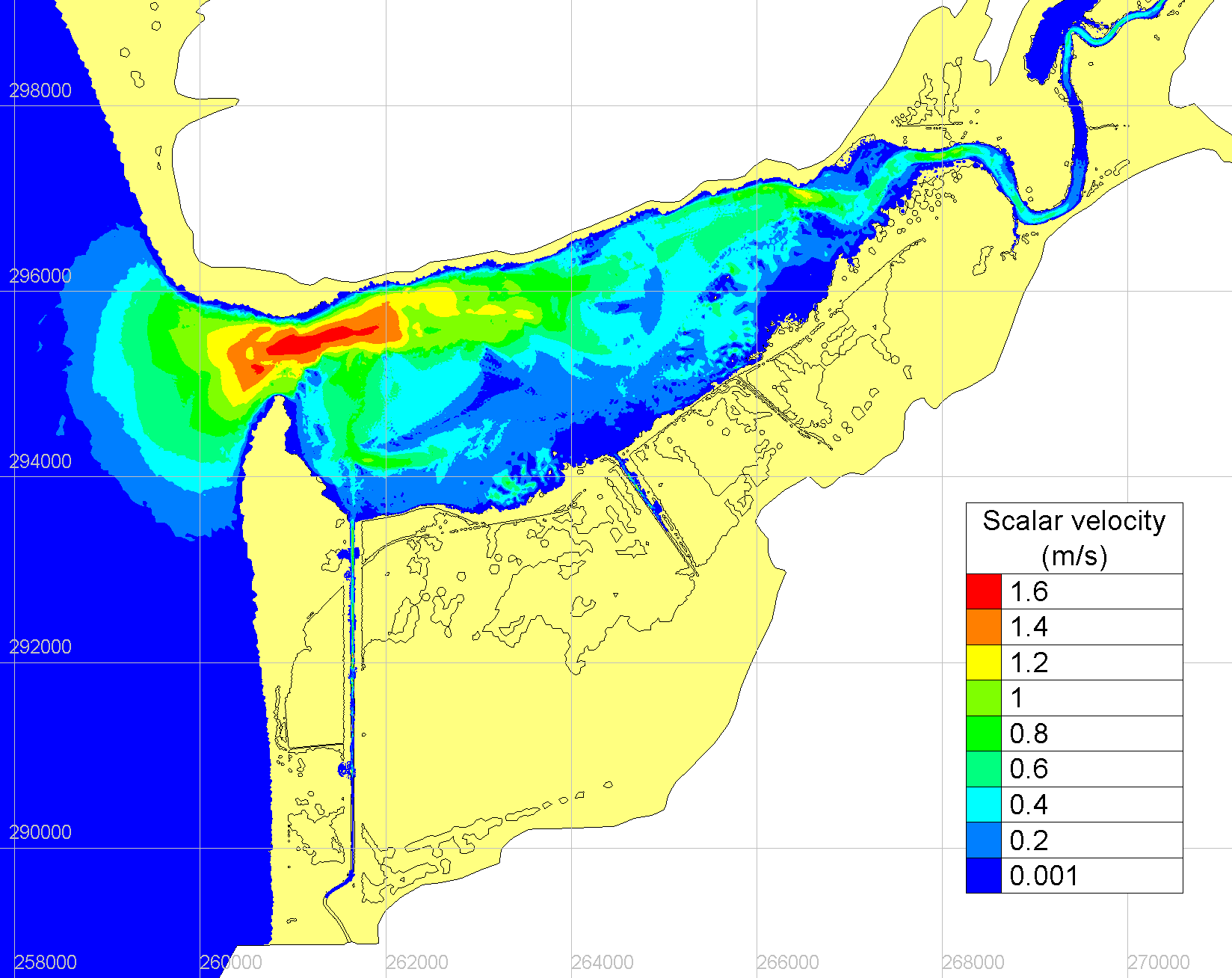 Figure 1. The Dyfi Estuary, mid-Wales. TELEMAC-2D model simulation, at high resolution (i.e. 10 m, requiring 150,000 model nodes), showing peak spring tide velocities flowing into the estuary. The model was also used to look at sediment transport and sand evolution within the sandy estuary region. The natural estuary shape would have covered most of the model domain, but has been reduced by the construction of rail embankments running along the present southern side of the estuary. 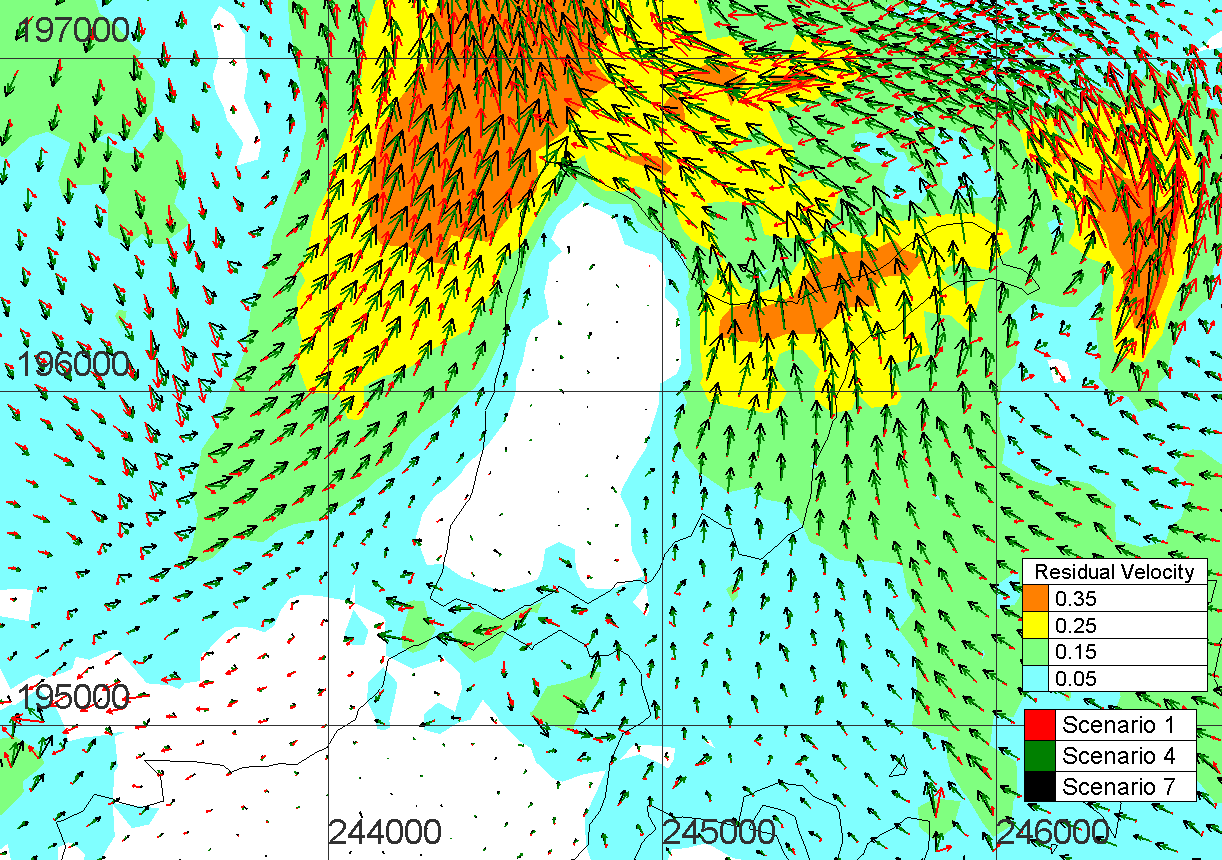 Hasanvand, K., Hashemi, M.R., and Abedini. M.J. 2013. Development of an Accurate Time Integration Technique for the Assessment of Q-Based Versus H-Based Formulations of the Diffusion Wave Equation for Flow Routing. Journal of Hydraulic Engineering 10.1061/(ASCE)HY.1943-7900.0000773.