CAMS are involved in a £1.4M Engineering and Physical Sciences Research Council (EPSRC) renewable energy project, which collaborates with universities throughout Wales and England, as well as partners in industry, with three major aims:

Understanding the potential environmental impacts and realistic conditions at proposed tidal stream energy sites will allow efficient, cost effective, and environmentally beneficial marine renewable schemes can be developed. Previous modelling studies have investigated the impact of proposed tidal-stream energy convertor arrays, typically by using tide-only hydrodynamic models. During extreme conditions wave energy will penetrate to the sea-bed, which not only has implication for the turbines themselves, but also the near-field and potential far-field sediment transport regime. One example of the potential environmental impact from marine renewables is to headland sandbanks. 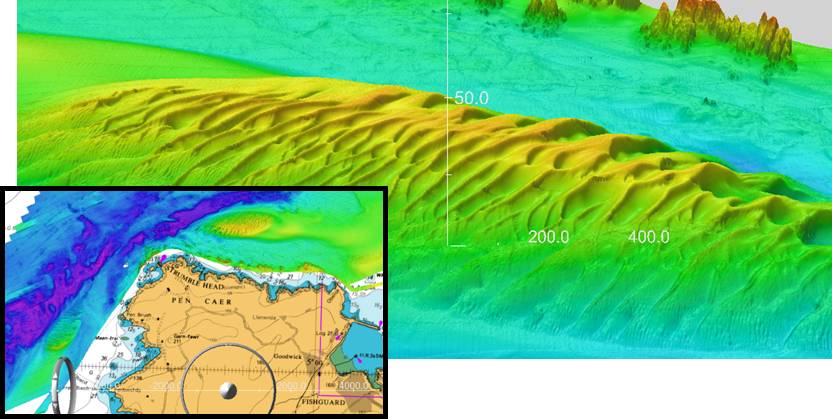 Offshore sand banks typically form outside areas of enhanced flow (hence potential tidal stream energy sites; for example headland sandbanks), and are an important source of marine aggregates, fisheries, as well as offering flood risk protection to coastal communities by attenuating storm waves. CAMS research has shown significant inter-annual variability within the geomorphology and volume of offshore sand banks, which has been linked to the extreme storm wave climate. Hence, in order to understand environmental impacts from manmade pressures of the coastal zone, it is important to understand the scale of such impacts within the context of natural variability. 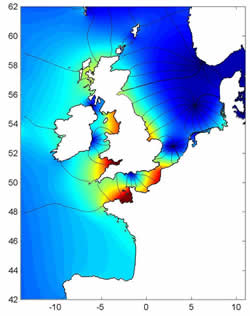 and potential extreme conditions experienced by tidal stream turbines can be simulated, which allows the performance and structural integrity of such arrays to be understood. Furthermore, the environmental impact and potential positive feedbacks of marine renewable schemes can be determined and clearly communicated.